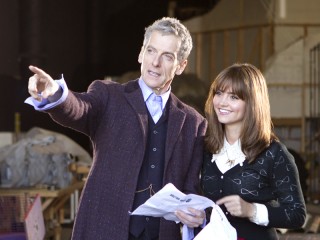 Filming on the eighth season of the modern Doctor Who began this week, with new Doctor Peter Capaldi. To celebrate, the BBC released the first photo from the Cardiff set, featuring Capaldi and co-star Jenna Coleman.

(Note that this is a behind-the-scenes image, and Capaldi is reportedly not wearing the Doctor’s “official” new costume.)

After an extreme close-up cameo in the 50th anniversary special, Capaldi made his official debut on the venerable BBC series in the Christmas episode “The Time of the Doctor.” The BBC says that 10.2 million people tuned in for Matt Smith’s final episode.

“New job, first day, slightly nervous,” Capaldi said. “Just like the Doctor, I’m emerging from the TARDIS into a whole other world.”

The show’s new star will also appear in the upcoming BBC drama The Musketeers (as Cardinal Richelieu), and recently dislocated his thumb during filming.

Filming on Season Eight of Doctor Who will reportedly continue until August. Season Eight is expected to begin airing around September.

Keep up with Doctor Who with our series guide!