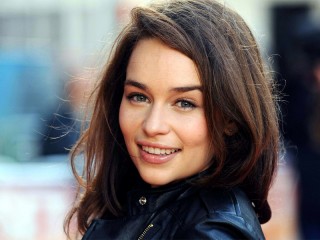 In what may be the most exciting genre casting news of the year, actress Emilia Clarke has just signed on to the big-screen reboot of the Terminator franchise. The Game of Thrones star will play Sarah Connor.

It is Clarke’s first big franchise role since her breakout part as Game of Thrones‘ Daenerys Targaryen.

The 26-year-old actress is a native of England.

Paramount, Skydance, and Annapurna are co-producing the next Terminator film as the first in a stand-alone trilogy. Alan Taylor (Thor: The Dark World) will direct, with a script from Laeta Kalogridis and Patrick Lussier.

Arnold Schwarzenegger is set to return to his iconic role in some capacity, and Jason Clarke (Zero Dark Thirty) is in negotiations to play John Connor. Also still to be cast is the role of Kyle Reese.

The movie is on the schedule for July 1, 2015, and the producers also hope to get a tie-in television series off the ground.

Game of Thrones returns to HBO with its fourth season this spring.