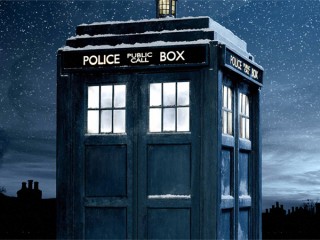 Doctor Who executive producer Steven Moffat appeared at the Edinburgh Fringe Festival this past week and answered a bunch of questions about the show and its future. As exciting as it is to hear from Moff himself, an unprecedented level of lazy reporting has lit the Interwebs on fire with false news.

The writer-producer appeared Wednesday at the Assembly Halls on top of the Mound (overlooking the city of Edinburgh). Here are three myths busted by what Moffat actually said.

RUMOR #1: Peter Jackson is going to direct an episode.

The legendary director of The Lord of the Rings and The Hobbit trilogies is a life-long Doctor Who fan, and has made it clear in the past that he’d love to direct an episode one day. And all he’d ask in return is his own Dalek! Moffat merely repeated this story to the assembled crowd, prompting dozens of reports that Jackson was booked and the cast were headed to New Zealand.

“Well, he’s serious about it,” Moffat said. “We talked at the premiere of The Hobbit. He just wants a Dalek. Give him a Dalek and then he’ll direct an episode. I have done the thing where I say ‘You see this amusingly small number? That is our budget? And this even smaller number is our schedule.’ So I don’t know how. I think he’d like it to go to New Zealand. I think it’s entirely possible. He’s a major fan.”

So it’s just a dream, at least for now. Jackson is very busy on the next two installments of The Hobbit and won’t have time for anything else for at least 16 months.

RUMOR #2: The Twelfth Doctor will have a Scottish accent.

Moffat didn’t actually confirm that this is the case, but it certainly is possible that newcomer Peter Capaldi will go with his natural accent with his version of the Doctor.

“I’d be very surprised if he didn’t [keep it],” Moffat said. In this case, it seems to be largely up to the actor to decide what his Doctor sounds like, in addition to how he dresses. David Tennant, also a native Scot, dropped his accent for the part.

Moffat was asked he if acknowledges the long-held convention of Doctor Who canon that the titular character only has the ability to regenerate twelve times. He reportedly replied with a concise “Yes,” and did not expound further.

Some outlets have reported based on this that the show is headed toward a major moment at the end of Capaldi’s tenure, however long that may be: end the show, or find a sci-fi way to rewrite the convention.

As any Who fan will tell you, of course, this is laughably bad mathematics: there are twelve regenerations, not twelve Doctors. So while this dilemma does await the show down the road, it won’t be until Capaldi’s successor — the Thirteenth Doctor — is ready to call it quits.

What is true is that Doctor Who will be back on our screens November 23 with the 50th anniversary special, pairing Tenth Doctor David Tennant and Eleventh Doctor Matt Smith, along with guest star John Hurt, and past and present companions Billie Pipe (“Rose”) and Jenna Coleman (“Clara”). Smith’s final episode and regeneration will be the Christmas Day special, set to begin filming soon.

Keep it set on SciFi Stream for more Doctor Who news that is actually real.