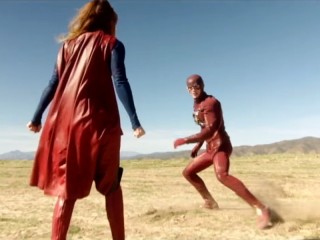 Our first look at footage from the upcoming Supergirl-Flash crossover is here, courtesy of CBS!

“Worlds Finest” airs this next Monday (8/7c on CBS), and the eighteenth episode of Supergirl‘s freshman season. Watch the 30-second teaser below.

In the episode the Flash (guest star Grant Gustin) arrives in Kara’s universe — a world parallel to his own — and she agrees to help him get home if he helps her deal with the super-villain team-up of Silver Banshee and Livewire.

Both shows are produced by the same creators, but air on different networks. The crossover opens up the possibility for more cross-pollination in Greg Berlanti’s DC television universe next year — should Supergirl be renewed for a second season.

Watch the episode Monday night, and then head over to the dedicated Supergirl section t GateWorld Forum to talk about it with other fans!