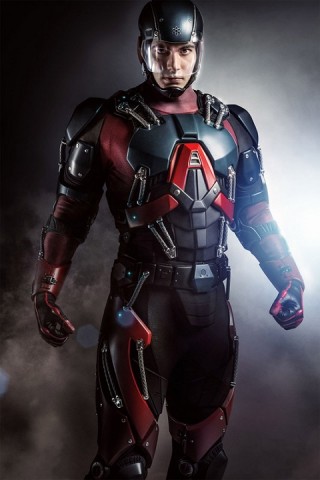 We’re just three weeks away from the television debut of another DC Comics superhero: The Atom is coming to Arrow.

The current season of the CW hit has been building toward the reveal for months, with Ray Palmer (Brandon Routh, Superman Returns) developing a high-powered suit to enable him to fight crime and avenge the death of his wife. From the picture (click to enlarge), it looks like the suit is just about done.

The Atom debuts in the February 25 episode, titled “Nanda Parbat.”

In the comics the character was introduced in 1961, and can harness the power of a white dwarf star fragment to alter his size at the subatomic level — shrinking himself down while retaining all his normal strength.

Arrow co-creator Greg Berlanti recently let it be known that the producers and the network are toying with the idea of an Atom spin-off, which following the success of this season’s freshman hit The Flash would bring The CW’s DC universe to three shows.