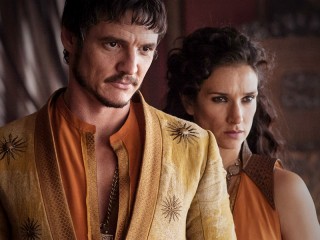 One of the biggest shows on cable is coming back in a matter of weeks, and now HBO has unveiled new details about the season premiere of Game of Thrones.

Season Four of the fantasy series begins with “Two Swords,” written by executive producers David Benioff & D. B. Weiss and directed by Weiss. Here’s how HBO describes the episode:

Tyrion welcomes a guest to King’s Landing. At Castle Black, Jon Snow finds himself unwelcome. Dany is pointed to Meereen, the mother of all slave cities. Arya runs into an old friend.

Expect that guest in the capitol to be Oberyn Martell of Dorne (pictured right), a.k.a. “the Red Viper” — a pivotal new character whose clan will begin to make their interests felt in Westeros. He is played by Chilean actor Pedro Pascall. Martell arrives in the city with his latest paramour, Ellaria Sand (portrayed by English actress Indira Varma).

Game of Thrones premieres Sunday, April 6 at 9/8c. Keep up with the show in the SciFi Stream show guide!