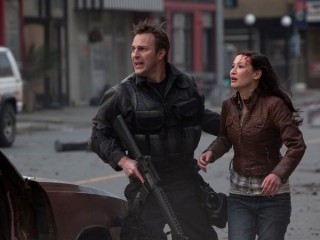 Back when Stargate Universe was wrapping up its production, visual effects supervisor Mark Savela and several of his friends were gearing up on a new idea.

Called “Echoes,” it was to be a science fiction show set in the apocalyptic world following an alien invasion of Earth. But Savela, SGU production assistant Ken Kabatoff, Andrew Karr, and Craig VandenBiggelaar were ready to do more than just write a script and try to convince a network to let them make it. Instead, in the spring of 2011 they put together their own financing and drew on their existing network of actors, cameramen, effects artists, and more … and shot the thing.

They used the set of the feature film Watchmen, which was still standing in Vancouver, and cast Stargate actors Jennifer Spence (who has since gone on to a supporting role on Continuum) and Mike Dopud (Varro on SGU), as well as actress Victoria Pratt (Mutant X). The result was a 12-minute presentation video that they could use to pitch a full series to networks and possible production partners.

Of course, then the real work began: pitching the show and continuing the long process of refinement and negotiations. As far as the public was concerned, Echoes fell silent.

This week, the silence broke.

Don Carmody Television has picked up development of the series, announcing at this week’s MIPCOM event in Cannes that it has signed Carl Binder to write the pilot episode and serve as Echoes‘ showrunner. Binder was a writer and producer on Stargate Atlantis and Stargate Universe, and most recently has been working as an executive producer on the Hallmark Channel series Cedar Cove. 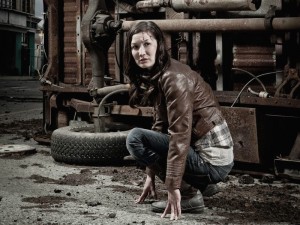 Set in the near future, the show follows a woman named Sonya, who is trying to survive after two warring extra-terrestrial species brought their intergalactic battle to our planet. Instead of another humans-vs.-aliens concept (akin to the current TNT series Falling Skies), Echoes aims to look at the challenge of human survival in a world where powerful species are at war with one another — taking little notice of the inhabitants of the world they are wrecking in the process.

“We are really excited to team up with Carl and Don Carmody Television to further expand the worlds and the characters we’ve created,” Savela told SciFi Stream exclusively. “Carl brings a perfect blend of smart, sophisticated, emotional science fiction storytelling and is the perfect fit for our show.”

He added that the team was in Los Angeles last week breaking not only the story for the pilot, but the overalls arcs, characters, and the tone of the series.

“With Carl (Binder)’s mastery of the genre and one of the best sci-fi visual effects team on the planet, we hope to bring the world and aliens of Echoes to life for the millions of fans of the genre the world over,” David Cormican, executive VP at Don Carmody Television, said.

The show is being shopped to international buyers at MIPCOM this week and is understood to already parked for development with a Canadian broadcaster, according to The Hollywood Reporter. Production on the pilot has not been greenlit yet.

Stick with SciFi Stream for more on the series as news breaks. In the meantime, you can read more about Echoes in 2011 interviews with Mark Savela over at GateWorld and SciFiAndTvTalk. You can also follow Echoes on Facebook.