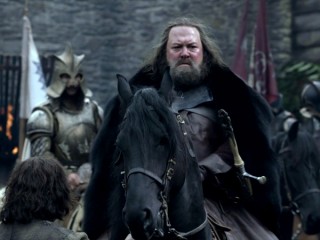 HBO is very confident in its new high-budget fantasy series based on the Song of Ice and Fire novels by George R.R. Martin.  How confident?  On Monday the premium cable channel renewed Game of Thrones after just a single episode had aired.

The premiere episode, “Winter Is Coming,” introduced viewers to the seven kingdoms of Westeros, populated by many characters and noble houses — many of whom are plotting their rise to power.  The episode drew 2.2 million viewers for its first airing, and a total of 4.2 million over three telecasts on Sunday night.

Six additional telecasts across HBO’s various networks on Monday added another 1.2 million to the tally, according to EW.com.

“We are delighted by the way David Benioff and D.B. Weiss have brought George R.R. Martin’s amazing book series to the screen, and thrilled by the support of the media and our viewers,” Michael Lombardo, president of HBO, said. “This is the continuation of an exciting creative partnership.”

Ratings aren’t as big a deal for the premium cable channel, which relies on attracting subscribers rather than on selling advertising.  It’s a solid premiere with plenty of room to build on — far less than Boardwalk Empire‘s 4.8-million premiere last year, but better than True Blood‘s starting point of 1.4 million.

True Blood has since grown to be one of HBO’s biggest hits.  The channel also likely realizes that the fantasy genre may turn off casual viewers at first, but will grow as word-of-mouth spreads.

The show also did very well in its U.K. premiere on Monday, setting a new record for Sky Atlantic with 750,000 viewers, EW reports.

Like the first season, Season Two will consist of 10 episodes.  It is likely to cover the events of the second novel in Martin’s series, A Clash of Kings.

Game of Thrones airs Sunday nights at 9/8c on HBO.