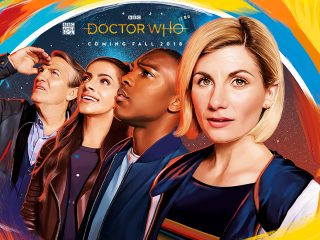 The Doctor is back — with a new face, a new T.A.R.D.I.S., new travelling companions, and a brand new broadcast night.

BBC One and BBC America finally broke their long Silence this morning with the announcement that the new season of Doctor Who will kick off October 7. Though the precise time is still to be announced, fans in the U.S. will be able to watch the season premiere in the afternoon — simultaneous with the U.K.’s premiere. BBC America will then air an encore of the episode in its regular primetime spot.

With a 10-episode regular season the schedule will leave a little more than a week between the finale and this year’s Christmas special.

The premiere episode title was also revealed today: “The Woman Who Fell to Earth.”

Doctor Who stars Jodie Whittaker as the Doctor, Tosin Cole as Ryan, Mandip Gill as Yasmin, and Bradley Walsh as Graham. New showrunner Chris Chibnall takes over this season from Stephen Moffat.

Chibnall has said that the new series will have plenty for long-time fans, but will also make for a good jumping-off point for viewers new to the show. 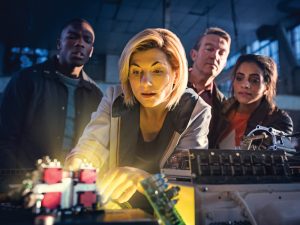 Jodie Whittaker’s full introduction is in “The Woman Who Fell to Earth.” | BBC America

If you are looking over your calendar and scratching your head — yes, October 7 is a Sunday. The veteran series moves to a new night this year, departing the Saturday evening spot it claimed when the new series debuted with Christopher Eccleston’s Ninth Doctor on March 26, 2005.

“Jodie Whittaker’s Doctor is about to burst into Sunday nights – and make the end of the weekend so much more exciting,” Chibnall said. “Get everybody’s homework done, sort out your Monday clothes, then grab some special Sunday night popcorn, and settle down with all of the family for Sunday night adventures across space and time. (Also, move the sofa away from the wall so parents can hide behind it during the scary bits). The Thirteenth Doctor is falling from the sky and it’s going to be a blast.”

“With Chris Chibnall at the helm and Jodie Whittaker’s arrival as the new Doctor we are heralding a brand new era for the show,” Charlotte Moore, Director of BBC Content, said. “And so it feels only right to give it a new home on Sunday nights at the heart of BBC One’s Autumn schedule.”

Be sure to bookmark SciFi Stream’s brand new Doctor Who Season 11 episode guide for more on upcoming episodes as the details are announced!