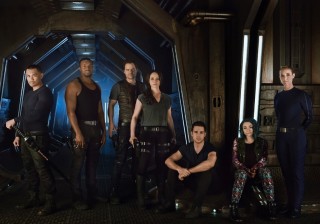 We’ve been waiting eagerly for this one for a long time now: the first trailer for Dark Matter has arrived, courtesy of Syfy Channel! Check it out below.

Created by former Stargate scribes Joseph Mallozzi and Paul Mullie, the new science fiction drama follows the crew of a derelict space ship who awaken from stasis with no memories of who they are or how they got on board.

The 13-episode first season is currently in production in Toronto, and airs this summer.

The show’s first cast photo was also released (click on the image above to see a larger version).