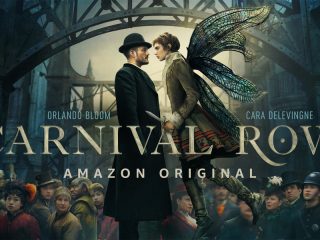 Amazon is stepping into the high fantasy genre, with the 8-episode series Carnival Row arriving on the Prime Video streaming service today. Check out the trailer below.

In Carnival Row a growing population of mythical creatures have fled their homeland and gathered in a human city, where tensions with the citizens mount.

Here’s how Amazon describes the premise:

With a serial killer loose on Carnival Row, and a government that turns a blind eye to the deaths of its lower class citizens, Rycroft Philostrate, a war-hardened investigator, is the only person willing to stop the murders and maintain the fragile peace. But when Vignette Stonemoss, a faerie refugee, turns up in the Burgue, she forces Philo to reckon with a past he’s tried to forget.

The series stars Orlando Bloom (Lord of the Rings), Cara Delevingne (Valerian and the City of a Thousand Planets), and Simon McBurney (The Borgias). Carnival Row is described as “neo-noir,” and was created by created by René Echevarria and Travis Beacham.

All eight episodes of the series are available now. Watch them with your Amazon Prime subscription, or sign up today for a free trial.