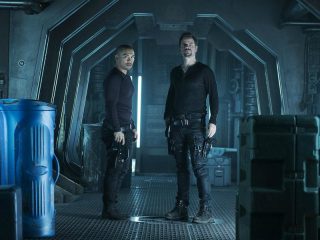 Syfy Channel’s summer combo is coming back next year.

On the eve of the Killjoys season finale Syfy and Canada’s Space announced today that they have renewed the show for a third season. Syfy has also renewed Dark Matter for its third year.

(Space also airs Dark Matter in Canada, but as of press time hasn’t confirmed the third season north of the border yet.)

Killjoys will get its usual 10 episodes for Season Three, from creator Michelle Lovretta (Lost Girl) and Temple Street Productions. The series chronicles the adventures of a trio of interplanetary bounty hunters called “Killjoys,” who chase deadly warrants throughout the Quad — a distant system on the brink of a bloody, multiplanetary class war.

Production begins this winter in Toronto, with actors Hannah John-Kamen, Aaron Ashmore, and Luke MacFarlane all set to return in the summer of 2017. Killjoys is the most-watched original series ever to air on Space.

“Killjoys is one of Space’s cornerstone programs and we’re thrilled to deliver a third season to the summer schedule,” the network’s Senior Vice-President Mike Cosentino said. “We’re looking forward to the expanding the universe with more engaging stories, characters, and action.” 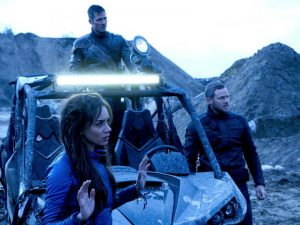 “We join fans worldwide in the excitement of knowing Dutch’s, John’s and D’avin’s journey will continue for another season,” executive producers David Fortier and Ivan Schneeberg said. “We are very proud of the unique place Killjoys occupies in the sci-fi world, thanks to Michelle’s voice and our incredible producers, cast and crew. Killjoys is a true pleasure to produce, and we’re thankful to our partners at Space and Syfy for loving the show just as much as we do and for allowing this incredible ride to continue.”

There’s no official word on the order size for Dark Matter, but the standard 13 hours is likely. The series comes from executive producers Jay Firestone, Joseph Mallozzi, and Paul Mullie, and follows a crew of (former) criminals who find themselves embroiled in an intergalactic conspiracy, seeking a mysterious device that may hold the key to victory in a looming all-out corporate war.

The season finale of Killjoys airs September 2 at 9/8c, followed by a new episode of Dark Matter — which wraps up on Friday, September 16 (10/9c).