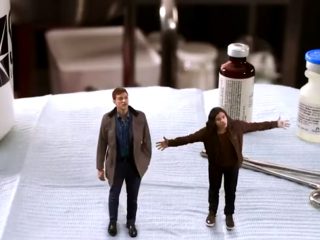 Team Flash goes in search of a meta with the power to shrink objects, only for Cisco and Ralph to get caught in his line of fire. Meanwhile Cecile realizes that her pregnancy has given her temporary powers of her own, and Barry tries to help a fellow prisoner who he’s convinced was wrongfully convicted.

A meta who can shrink anything he touches battles Team Flash. Cisco (Carlos Valdes) and Ralph (guest star Hartley Sawyer) get caught in his crossfire and are shrunk to miniature versions of themselves. Cecile (guest star Danielle Nicolet) realizes her pregnancy has caused her to have temporary powers and discovers she can hear other people's thoughts, which unnerves Joe (Jesse L. Martin). Meanwhile, Barry (Grant Gustin) meets someone with a mysterious connection to Henry Allen.