Browse: Home / On Hiatus / Legends of Tomorrow / Season Three / The Curse of the Earth Totem 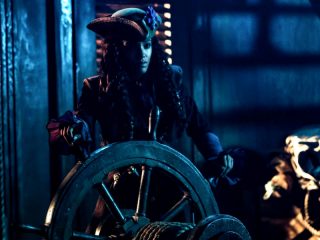 Nick finds a lead on the Earth Totem, sending the Waverider to the pirate-infested Bahamas in 1717 — where they hope to join the crew of the legendary Blackbeard. Elsewhere Rip Hunter tracks down a speedster ally, and Sara takes some personal time.

When Sara (Caity Lotz) decides to take some private time, the Legends pursue a lead on the whereabouts of the long-lost Earth Totem. Without Sara's knowledge, the Legends find themselves in 1717 to hunt for Blackbeard's long-lost treasure, but in true Legends fashion things go awry. Meanwhile, Ray (Brandon Routh) feels guilty about something he has done and tries to make amends, which lands him in even bigger trouble.