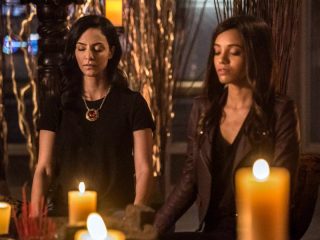 After kidnapping Ray the Darhks attempt to rescue a scientist from 1962 East Germany, who might be able to help them restore the Fire Totem — if Nora and Ray can rescue him from Damien’s younger assassin self. Rip and Wally West arrive on the Waverider, and Amaya and Zari use meditation to try and locate a missing totem.

When Damien (Neal McDonough) and Nora Darhrk (guest star Courtney Ford) take Ray hostage they force him to try and fix the Fire Totem, but Ray (Brandon Routh) tries to use the power struggle between them to his advantage. Ray and Nora find themselves working together in 1960's East Germany in order to fix the totem, but soon come face to face with a younger and deadlier version of Damien Dahrk. Meanwhile, Sara (Caity Lotz) seems to be taking positive steps in her personal life.