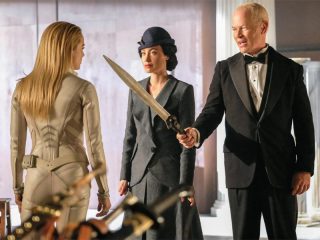 Helen of Troy’s appearance in 1930s Hollywood sparks an all-out-war — literally — amongst the studios, sending the Legends to try and find her before the future is changed. But things get complicated when Ray’s attempt to undo Martin and Jax’s bond leaves their minds in one another’s bodies.

A DIFFERENT KIND OF WAR

When the Legends track down an anachronism in 1930s Hollywood, they discover it's none other than a time-displaced Helen of Troy and she's just started a war between two film studios. As the Legends try to fix history and return Helen (guest star Bar Paly) to the Bronze Age, things get complicated when they are blindsided by the appearance of a former enemy. Sara (Caity Lotz) contemplates an offer she is made, which would make the Legends leave the anachronisms be. Meanwhile, Stein (Victor Garber) and Jax (Franz Drameh) find themselves in an unusual predicament.