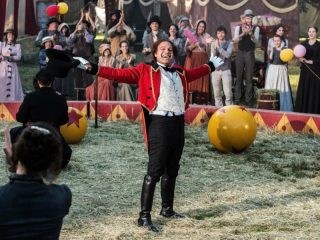 To prove that they can fix anachronisms the Legends fly to P.T. Barnum’s circus in the year 1870, where a creature from the distant past has become P.T.’s latest attraction. Sara retrieves Amaya from Zambesi for help on the mission, forcing Nate to confront her decision to leave him.

IT'S ALWAYS A CIRCUS

The Legends find themselves in 1870 to fix the anachronism which happens to be at P.T. Barnum's fledgling circus. However, Nate (Nick Zano) and Ray (Brandon Routh) accidently free a saber toothed tiger, creating a bigger problem. Meanwhile, P.T. Barnum (guest star Billy Zane) is on the hunt to capture Nate and Ray to make his show even more exciting for the crowd.