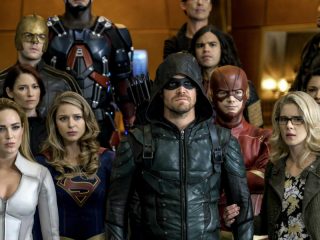 The Atom and the other Legends return just in time to come to the aid of Supergirl and the others who have been imprisoned by Earth-X Oliver and Overgirl — who plan to use their Waverider to attack Central City. Meanwhile, one of the Legends lies near death in the aftermath of the fight to get home from Earth-X.

THE EPIC FOUR-WAY CROSSOVER WITH "ARROW," "SUPERGIRL," "THE FLASH" AND "DC'S LEGENDS OF TOMORROW" CONCLUDES