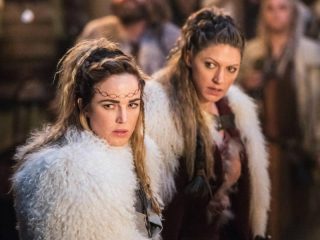 As the team mourns a major loss, Ava Sharpe joins them to try and resolve a high-level anachronism at Leif Erikson’s Viking settlement in the New World — where the arrival of a talking toy from modern-day has altered the course of American history. Meanwhile, Leo Snart tries to get Mick to improve himself.

Rattled by recent events, the Legends dive into work which finds them investigating an Anachronism in a Viking settlement in the New World. The Legends realize that the Norsemen are worshipping an artifact as their god and are surprised by the artifact's origin. For the first time, Sara (Caity Lotz) is worried that they might need back up when Damien Darhk (Neal McDonough) shows up. Meanwhile, Jax (Franz Drameh) finds a loophole that could potentially change history, but it is a risk he is willing to take.