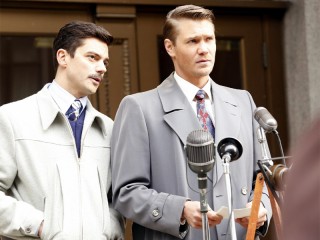 After Ivchenko and “Dottie” successfully tests a chemical weapon, Howard Stark makes a surprise return to help the S.S.R. catch them and save the city — by using himself as bait.

IN HER DARKEST HOUR PEGGY RISKS IT ALL TO SAVE HOWARD STARK AND THE WORLD, ON "MARVEL'S AGENT CARTER" ON ABC