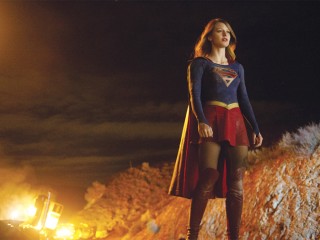 The 1-minute spot is mostly a distillation of the earlier, long-form preview with footage from the show’s pilot episode. Take a look below.

Producers said at the recent gathering of the Television Critics Association that they’ll be expanding into the DC Comics character roster early in the first season, including Red Tornado, Non (in the comics, a Kryptonian scientist lobotomized and turned into a brutish prisoner of the Phantom Zone), and General Sam Lane.

CBS has also announced that Chris Browning (Sons of Anarchy, The 100) has been cast as the super-charged villain Ben Krull, a.k.a. Reactron. Having been dealt a humiliating defeat in Metropolis at the hands of Superman, Reactron heads to National City to exact revenge on his cousin, Kara.

Supergirl stars Melissa Benoist (Glee) as the titular Kryptonian, Kara Zor-El, who as a 20-something professional decides to embrace her powers and her destiny to protect her city. (From the looks of this teaser, that looks to include some extra-terrestrial threats!)

The series premieres Monday, October 26 at 8:30/7:30c on CBS before moving to its regular time slot on November 2. Keep it with SciFi Stream for full coverage of the show!