Browse: Home / 2015 / July / Fear the Walking Dead Gets Second Season Before Its Premiere 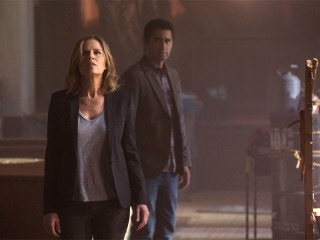 The new AMC zombie drama Fear the Walking Dead has just been renewed for a second season … weeks before the series premiere airs.

The cable network pulled the trigger on ordering a 15-episode sophomore year for the show, which is set in the same world as mega-hit The Walking Dead — in Los Angeles, right at the outbreak of the undead apocalypse.

The spin-off is set to premiere in the U.S. on Sunday, August 23 (9/8c) with a special 90-minute episode. AMC will air the premiere simultaneously on its network of AMC Global channels around the world, and then re-air it during primetime hours in local timezones.

Living in the same universe as The Walking Dead, Fear the Walking Dead is a gritty drama that explores the onset of the undead apocalypse through the lens of a fractured family. Set in a city where people come to escape, shield secrets, and bury their pasts, a mysterious outbreak threatens to disrupt what little stability high school guidance counselor Madison Clark (Kim Dickens) and English teacher Travis Manawa (Cliff Curtis) have managed to assemble.
The everyday pressure of blending two families while dealing with resentful, escapist, and strung out children takes a back seat when society begins to break down. A forced evolution, a necessary survival of the fittest takes hold, and our dysfunctional family must either reinvent themselves or embrace their darker histories.

Like its predecessor, the first season will take the form of a modest, 6-episode ramp up.  That will help kill time before The Walking Dead returns with its sixth season on October 11.

A special episode of chat show The Talking Dead will air in the U.S. after the spin-off’s October 4 finale (10/9c).

Showrunner Dave Erickson said at this week’s Television Critics Association Press Tour that the writers do not intend to pepper the new series with crossovers and Easter Egg references to characters from the other show, which is set on the opposite side of the continent and is currently a bit later in the timeline.

Season Two of Fear will air in 2016, likely bridging the summer gap between seasons of the parent show.