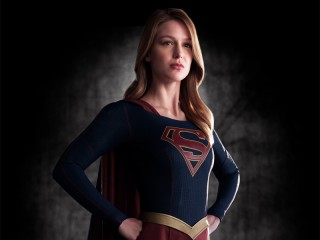 It’s not a bird. It’s not a plane. And it’s not a man. But Supergirl looks to be the new show to watch this fall.

CBS has picked up the DC Entertainment series from producers Greg Berlanti, Andrew Kreisberg (both of Arrow and The Flash), Ali Adler (Chuck), and Sarah Schechter (The Mysteries of Laura). It stars Melissa Benoist (Glee) as Kara Danvers, a 20-something business assistant in National City who decides to step out from the shadows and embrace her true self: Kara Zor-el, cousin to the famous Superman, who escaped from the planet Krypton at the age of 12.

Don’t miss the first-look trailer below.

The show will premiere in November and air Mondays at 8/7c on CBS. It is the network’s first attempt at a class superhero series in many years (the original Flash aired on CBS in the early 1990s), and part of a plan to diversify the demographic of CBS’s typically older-skewing audience.

SUPERGIRL is an action-adventure drama based on the DC Comics character Kara Zor-El (Melissa Benoist), Superman’s (Kal-El) cousin who, after 12 years of keeping her powers a secret on Earth, decides to finally embrace her superhuman abilities and be the hero she was always meant to be. Twelve-year-old Kara escaped the doomed planet Krypton with her parents’ help at the same time as the infant Kal-El. Protected and raised on Earth by her foster family, the Danvers, Kara grew up in the shadow of her foster sister, Alex (Chyler Leigh), and learned to conceal the phenomenal powers she shares with her famous cousin in order to keep her identity a secret.

Years later at 24, Kara lives in National City assisting media mogul and fierce taskmaster Cat Grant (Golden Globe Award winner Calista Flockhart), who just hired the Daily Planet’s former photographer, James Olsen (Mehcad Brooks), as her new art director. However, Kara’s days of keeping her talents a secret are over when Hank Henshaw (David Harewood), head of a super-secret agency where her sister also works, enlists her to help them protect the citizens of National City from sinister threats. Though Kara will need to find a way to manage her newfound empowerment with her very human relationships, her heart soars as she takes to the skies as Supergirl to fight crime.

The long-form trailer below clocks in at a full six and a half minutes, so expect spoilers that cover pretty much the whole of the show’s first episode.

For those keeping score at home, Supergirl‘s pick-up marks no fewer than _ traditional comic book hero shows on the broadcast networks next season. That list also includes the fourth season of Arrow, the second year of The Flash, and the debut of superhero team-up show Legends of Tomorrow on The CW; Season Two of Gotham on FOX; and Marvel’s Agents of S.H.I.E.L.D. and Agent Carter on ABC (with seasons three and two, respectively).

DC’s Titans is also still in development at TNT.

Keep it with SciFi Stream all summer long for more on Supergirl and the rest of the sci-fi and fantasy fall line-up!