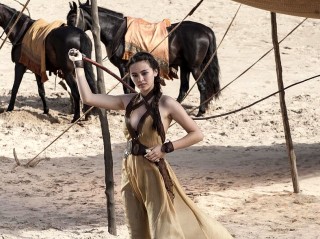 We’re counting down to the April premiere of what promises to be an epic season of Game of Thrones, and now we have a few tantalizing episode titles.

Season Five of the hit HBO fantasy series begins Sunday, April 12, with “The Wars to Come.” Here is the network’s official episode description:

Cersei and Jaime adjust to a world without Tywin. Varys reveals a conspiracy to Tyrion. Daenerys faces a new threat to her rule. Jon is caught between two kings.

When the show left off at the end of last season (SPOILERS for Season Four …), Tyrion Lannister (Peter Dinklage) had murdered his father Tywin and former lover, Shae, and escaped King’s Landing on board a ship — along with a little help from fellow refugee Varys (Conleth Hill). Across the Narrow Sea Daenerys Stormborn (Emilia Clarke) is Queen of the former slave city of Meereen, but finds ruling at least as challenging as conquering. Meanwhile the wildlings of the North have invaded Westeros and attacked Castle Black — repelled only with help from Stannis Baratheon (Stephen Dillane), of all people. Sansa Stark (Sophie Turner) is taking her future with Peter Baelish (Aidan Gillen) in the Veil into her own hands, and Arya Stark (Maisie Williams) left behind all that she knew and set sail for Essos. 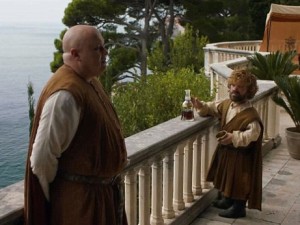 The premiere will be followed in subsequent weeks by:

Season Five will introduce new lands (including Essos and also Dorne, homeland of Oberyn Martell) and new characters — including the “Sand Snakes,” Oberyn’s bastard daughters who each fight with their own distinctive weapon. (Get a glimpse of them in the video below.) And younger characters, including Cersei Lannister’s children Myrcella and (now king) Tommen, have grown up a bit and will be more heavily featured. (Remember, Tyrion sent Myrcella off to Dorne in Season Two to protect her from Stannis’s coming seige of King’s Landing.)

At the close of last season Bran (Isaac Hempstead Wright) encountered his destiny upon reaching the Three-Eyed Raven. Since his storyline has caught up with where he is in the five novels published to date, the actor and co-stars Kristian Nairn (Hodor) and Ellie Kendrick (Meera) will reportedly take Season Five off.

We’ve opened up our Season Five episode guide — stay tuned for more on the show!