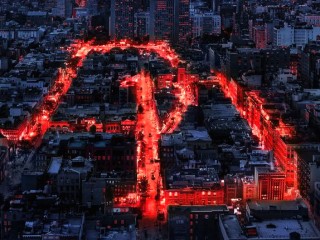 The show’s debut, 13-episode season will be available in its entirely starting Friday, April 10 (12:01 a.m. Pacific). Netflix promises a global release, with Daredevil becoming available for streaming in every country where the service is available.

Charlie Cox stars in the show as Matt Murdock, who was blinded as a boy but had his other senses extraordinary heightened. Now he fights crime by day as a lawyer, and by night as a costumed hero protecting the street’s of New York’s Hell’s Kitchen neighborhood. (Ben Affleck played the character in the 2003 movie.)

The new show is the first leg in an ambitious plan for Marvel and Netflix, to be followed by short series focused on the characters of Jessica Jones, Iron First, and Luke Cage — culminating in a team-up mini-series event called The Defenders.

Stick with SciFi Stream for more on the new show in the weeks to come!