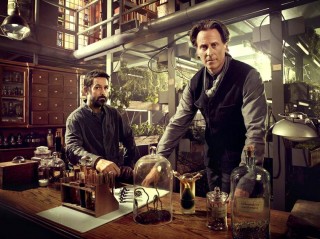 We’re just a few weeks away from the debut of Season Two of Helix, one of Syfy Channel’s biggest hits from 2014. Helix premieres Friday, January 6 at 10/9c on Syfy.

This year the show follows the C.D.C. scientists from the extreme conditions of the arctic to a new outbreak and the jungles of an isolated island, where a cult with hopes to create a utopian society.

Steven Weber (Wings) and Matt Long (Mad Men) join the show, with Weber playing the cult leader Brother Michael in a recurring role. Charismatic and charming, he also happens to be a gift geneticist.

Long will play Dr. Kyle Sommer, a new member of the C.D.C. team, as a new regular cast member. His character is described as “aworld-class toxicologist whose charm matches his sharp intellect. A preacher’s son from Texas, he is quick with a story or a joke, able to ingratiate himself into any group.”

Also returning for Season Two are Billy Campbell (The Killing), Kyra Zagorsky (Supernatural), Jordan Hayes (What If), and Neil Napier (X-Men: Days of Future Past). The 13-episode season is shooting in Montreal, Quebec.

Take a look at the teaser trailers below, and head over to SciFi Stream’s Helix show guide for more details and sneak-peek video!