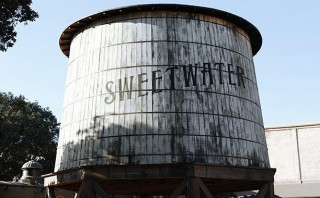 HBO is moving forward with Westworld, a new science fiction drama based on the 1973 film by Michael Crichton.

Westworld is set in a futuristic amusement park where visitors can have their darkest fantasies comes true. The park is populated by artificial life forms, and HBO describes the series as “a dark odyssey about the dawn of artificial consciousness and the future of sin.”

The pilot for the show has an impressive cast, including Anthony Hopkins, Ed Harris, James Marsden, Evan Rachel Wood, Miranda Otto, Thandie Newton, and Jeffrey Wright. Jonathan Nolan (Interstellar, Person of Interest) is a co-writer (with Lisa Joy) and director.

Westworld will be executive produced by J. J. Abrams and Bryan Burk for Bad Robot, and Jerry Weintraub for Warner Bros Television. The show will bow on HBO in 2015.

Nolan is also reportedly developing a television adaptation of the landmark science fiction novel series Foundation, written by Isaac Asimov, for HBO and Warner Bros. The network has not yet commented on the report, but it did scoop up the rights to Foundation last summer after Sony let them expire.

In addition to fantasy favorite Game of Thrones, the premium cable network also has the genre-tingled The Leftovers, about a post-rapture world. That show was just renewed for a second season.