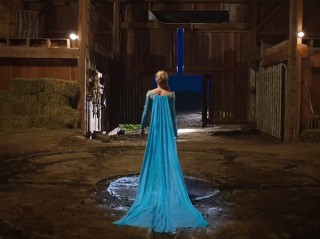 Oncers who tuned in to the season finale of ABC’s Once Upon A Time were treated to a surprising ending, hinting at what’s to come in the show’s fourth season.

Elsa, featured in the 2013 animated smash hit Frozen, will come to Storybrooke and feature prominently next season. It’s a perfect fit for the Disney-owned network and the fairy tale-driven show.

Executive producers Adam Horowitz and Edward Kitsis confirmed the identity of the mysterious woman at the end of the Season Three finale in an interview with The Hollywood Reporter.

“[What] we loved so much about the character of Elsa was that she was considered a villain but she never really was,” Kitsis said. “She was misunderstood. That, on our show, speaks to us so strongly, that it was a toy we had to play with.

“It’s funny because I see lots of people [saying], ‘Oh! Did Disney ask them to do this?’ It’s quite the opposite. It’s actually quite hard to get these characters on the show. It’s not like you get a call from Mickey Mouse saying, ‘I want you to sell mermaids this week.’ It’s the opposite. It’s very hard to get these. We were very honored that Disney allowed us to take this toy off the shelf and let us play with it.”

Check out the video below, and keep your browser tuned to SciFi Stream for more on Season Four of Once Upon A Time! The show is expected to return at the end of September.

Who do you think should play Elsa on Once?