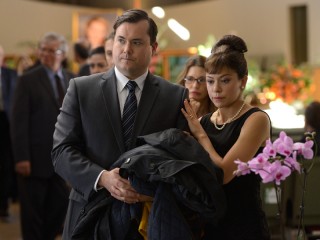 BBC America is in full-swing in its promotions for the second season of Orphan Black. This week the cable channel released not only these nifty cast photos, but a handful of photos from the first three episodes of the new season — and some titles and much-desired plot details.

Here’s the episode line-up for the start of Season Two:

Nature Under Constraint and Vexed
(Airs: April 19)
In the season premiere, Sarah is out of options, on the run, and pursued by deadly adversaries. Desperate to find her daughter Kira, Sarah suspects ruthless pro-clone Rachel is behind her daughter’s disappearance and sparks an all out war against her. Alison and Donnie attend the funeral of her fallen friend, Aynsley, causing Alison to sink into guilt and despair. Cosima is faced with a perplexing decision that may have dire consequences.

Governed By Sound Reason and True Religion
(Airs: April 26)
While Alison struggles with Aynsley’s death and Cosima grapples with the worsening symptoms of her mysterious sickness, Sarah enlists Art’s help to find Kira and is shocked when she learns where the trail leads.

Mingling Its Own Nature With It
(Airs: May 3)
After hitting the road with Felix, Sarah is forced to turn to a ghost from her past – an old flame named, Cal Morison. When their brief respite is brutally shattered, Sarah realizes that no matter how far she runs, it will never be far enough.

Governed As It Were By Chance
(Airs: May 10)
Sarah comes home to look for answers. With Cosima’s help, she digs into the origins of the clone experiment. The hunt takes her right into the belly of the beast, but getting out again could cost her more than she knows.

Images from the season premiere:

Head over to our brand new Orphan Black image gallery for all the new shots.