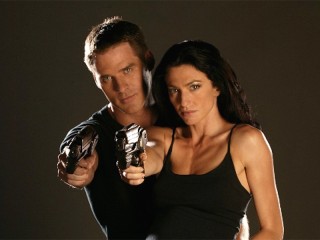 Is Farscape about to make a frelling fantastic return? A new report indicates that a movie script is being written.

The screenplay duties are being performed by former Farscape series writer Justin Monjo, whose credits include important episodes including “A Human Reaction,” “The Hidden Memory,” “The Choice,” and “Prayer.” Brian Henson would direct the movie for Jim Henson Productions.

Farscape ran for four seasons on Syfy Channel (then SCI FI) in the United States (from 1998 to 2002), followed by the 4-hour miniseries Farscape: The Peacekeeper Wars. That left off with John Crichton (Ben Browder) and Aeryn Sun (Claudia Black) sailing off into the sunset on board Moya with their newborn son. 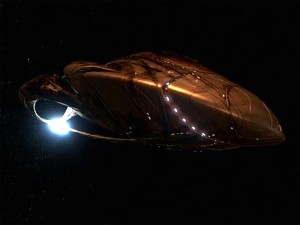 “In the movie, it’s revealed the boy had special powers which made him the target of the villainous aliens so his parents hide him on Earth,” the site reports. “The plot follows the kid at the age of 19 when his whereabouts have been discovered and he rejoins his parents on their spaceship. Monjo says the film would be shot in Australia.”

As of yet there is no news on any production partners who might have committed to the film, nor any distribution in the U.S. or other countries. A movie script is also far, far away from any potential casting news. So stay tuned … we’ll be on this story like a D.R.D. looking for a defective amnexus fluid conduit to repair.

Monjo is also writing a pilot for a potential HBO series The Beasts of Valhalla. Peter Dinklage (Game of Thrones) is in talks to star as a dwarf detective. Monjo calls it “a grounded sci-fi series.”

Check out the full report at If.com.au, and stick with SciFi Stream for continuing coverage!