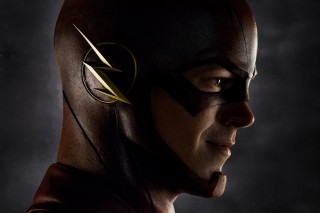 It’s been a long time coming, but today The CW released the first look at the costume for the Flash! (Click on the image to enlarge.)

Grant Gustin stars as Barry Allen in the pilot for a potential new show, a spin-off of Arrow. Gustin first appeared in episodes 8 and 9 of the current second season, and will be back this spring in episode 20.

Allen is a forensic scientist who becomes the fastest man alive after a freak accident gives him super-speed.

The costume was designed by three-time Oscar(R) winner Colleen Atwood, whose credits also include Arrow, Alice in Wonderland, Memoirs of a Geisha, Snow White and the Huntsman, and Sweeney Todd.

Production on the Flash pilot begins next week under the direction of David Nutter. Arrow’s Greg Berlanti and Andrew Kreisberg are executive producing with Nutter, and the pilot script was written by Berlanti, Kreisberg, and DC Entertainment Chief Creative Officer Geoff Johns.