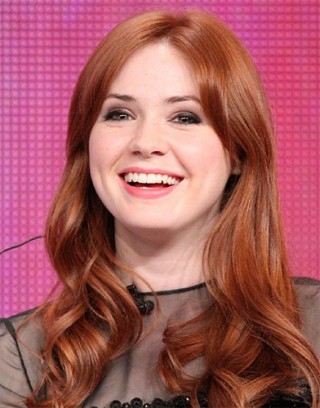 Former Doctor Who co-star Karen Gillan is hopping over the Pond (see what we did there?) to star in a new ABC comedy. Gillan has been cast in Selfie, a pilot for a potential new show from Emily Kapnek, the creator and executive producer of the comedy Suburgatory (now in its third season).

Selfie follows Eliza Dooley (Gillan), described as “a self-obsessed, twentysomething who is more concerned with ‘likes’ than being liked,” says Deadline. “After suffering a very public and humiliating breakup, she becomes the subject of a viral video and suddenly has more social media ‘followers’ than she ever imagined — but for all the wrong reasons. She enlists the help of a marketing expert at her company to help repair her tarnished image.”

A 26-year-old native of Inverness, Scotland, Gillan played companion Amy Pond for two and a half seasons on the BBC hit. Since departing the iconic science fiction series she has had a recurring role on the Adult Swim comedy NTSF:SD:SUV, and appears in the upcoming Marvel tent pole movie Guardians of the Galaxy.