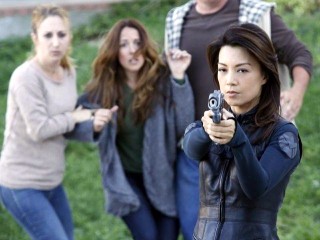 Last week was the Thanksgiving holiday in the U.S., making for an odd and uneven week in the sci-fi and fantasy ratings race. Several shows took the week off, while others enjoyed a boost from the change-up in competition.

Agents of S.H.I.E.L.D. and Supernatural were the big winners on Tuesday night, with major gains over their previous airings of new episodes. On the other hand, Atlantis suffered mightily in its second week — which is what happens when the Doctor gets into his TARDIS and departs Saturday nights.

Every other show was down a bit for the holiday week — with the exception of The Walking Dead, which closed out its fall season once again squarely on top!

Agents of S.H.I.E.L.D. gained two-tenths in the demo, but incredibly more than 3 million additional viewers over the previous week. That means the vast majority of the boost in viewers came from those older than 49. This was the first week that the show was not up against a new episode of NCIS (instead CBS showed an animated Rudolf special), and it would seem that some of the NCIS regulars gave the S.H.I.E.L.D. team a shot. We’ll see how many of them stick around.

This week an estimated 291,000 viewers returned for the second episode of Atlantis. The huge drop-off is due to the fact that the series premiered behind the Doctor Who 50th anniversary special, with 838,000 viewers. Hopefully that number is still good enough that BBC America isn’t regretting picking up the show’s second season after just a single episode. The new series is doing great in the U.K., but over here it could certainly use a companion show on “Supernatural Saturday” to help it find a solid U.S. audience.