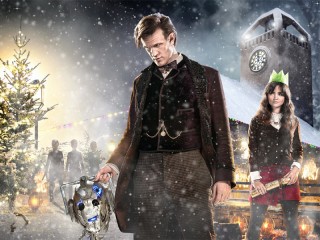 In the wake of last Saturday’s long-awaited 50th anniversary special “The Day of the Doctor,” we have new intel on what’s coming next on Doctor Who!

The BBC has revealed the title and first, very teasery image for the 2013 Christmas special, which will feature Matt Smith as the Eleventh Doctor (or is it the Twelfth?) and Jenna Coleman as Clara. The episode is titled “The Time of the Doctor.”

It will be Matt Smith’s final story, and see his regeneration into the Twelfth Thirteenth Doctor — played by Peter Capaldi. (Capaldi’s first full series — the eighth season of the modern Doctor Who — won’t start till next fall.)

“Orbiting a quiet backwater planet, the massed forces of the universe’s deadliest species gather, drawn to a mysterious message that echoes out to the stars — and amongst them, the Doctor,” BBC says. “Rescuing Clara from a family Christmas dinner, the Time Lord and his best friend must learn what this enigmatic signal means for his own fate and that of the universe.”

The promo image features the Doctor holding a wrecked (and modified?) Cyberman head, with three of the sinister Silence standing in the background. Evidently fresh from her Christmas dinner, Clara has a paper crown and what looks like a Christmas cracker.

There’s also a first, very short teaser that you can watch below.

“The Time of the Doctor” is expected to air on Christmas Day on BBC One in the U.K., BBC America in the United States, and SPACE in Canada. Stick with SciFi Stream for more, and be sure to visit our Doctor Who series guide!