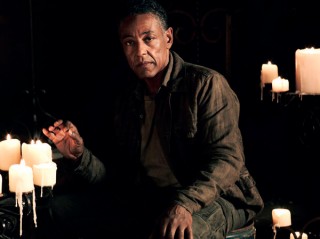 NBC has just released its official description for “One Riot, One Ranger,” the upcoming fifth episode of Revolution Season Two!

The episode will air on October 23. Here’s the run-down … but, of course, beware of spoilers:

MYSTERIOUS SCIENCE IS ABOUND AND ALMOST NO ONE IS IMMUNE FROM SURPRISES – Aaron (Zak Orth) and Rachel (Elizabeth Mitchell) speculate on the extreme effects of Nano technology, while he also confides in Cynthia (Jessica Collins). Meanwhile a figure from Miles’s (Billy Burke) rugged past, Texas Ranger John Fry (Jim Beaver) reemerges. Fry could be Miles’ chance to bring down the Patriots in a big way, however Fry will need convincing. Charlie (Tracy Spiridakos) has a surprise for Miles and her mother, while Secretary Allenford (Nicole Ari Parker) holds a secret important to Neville (Giancarlo Esposito).

Head over to our Revolution show guide for more on what’s coming up! The series airs Wednesdays at 8/7c on NBC.