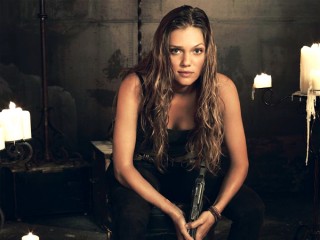 Last week’s ratings race for science fiction and fantasy television really shows the power of the season premiere — and the network marketing machines that build up the premiere.

The only show to enjoy an increase in viewers this week was The Vampire Diaries, which began its fifth season by improving on last spring’s finale. Those shows that opened earlier in September saw their numbers begin to head south, toward what will likely be their average numbers for the year.

But which shows took a big hit, and which held onto more of their audience? Let’s get to the numbers.

Clearly S.H.I.E.L.D. and Revolution suffered the most in their live viewership numbers. That’s not all that big a deal for the former, which opened to huge numbers and was expected to settle at a lower weekly level. It’s still a stellar number for ABC in the time slot, and much of S.H.I.E.L.D.‘s missing audience is likely to shift to DVR and keep watching.

Revolution had a weak opening, on the other hand, so a further 20 percent drop in week 2 is bad news. It’s still a good scripted performer for NBC, but it’s renewal chances are likely headed for “on the bubble” status.

The drops for Sleepy Hollow and Once Upon A Time are more in lines of what we would expect to see. The former has already been renewed for a second, 13-episode season, and hopefully will settle in at a regular showing in the 7 million range.

The CW tells an interesting story this week. The Vampire Diaries made a successful return, but the network may have cause to worry over its new spin-off series. The Originals opened 15 percent lower than its lead-in. While that in itself isn’t terribly surprising, starting this week the show will move to Tuesdays at 8/7c … and it is difficult to see this show doing even this well up against the likes of NCIS, S.H.I.E.L.D., and The Voice.

It’s too early to call most of this, as shows make their debuts and then take a few weeks to settle into anything resembling a regular pattern. Sleepy Hollow is clearly the first success story of the season, and FOX has to be congratulating themselves over the strategy of giving the show an early premiere.