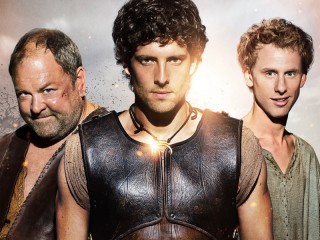 The BBC’s new Saturday night fantasy drama Atlantis is a hit, and the U.K. network is eager to bring it back for a second season.

This week the network renewed Atlantis for Season Two, just shy of the mid-point of its first season broadcast.

The show has been a strong ratings performer for BBC One, debuting to more than 7.3 million viewers last month.

Written by Howard Overman (Merlin, Misfits) and produced by Julian Murphy and Johnny Capps (Merlin), the show follows a present-day Jason (Jack Donnelly) into the world of ancient Greek myths, pairing him with Hercules (Mark Addy) and Pythagoras (Robert Emms) in a series of adventures on the legendary lost island.

Actors Robert Lindsey and John Hannah will guest star in upcoming episodes of Season One.

Season Two is expected to air another 13 episodes next fall.

Atlantis airs Saturday nights on BBC One. In the U.S. it begins November 23 on BBC America, following the Doctor Who 50th anniversary special.