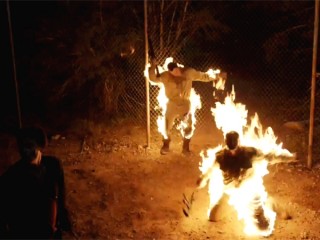 It’s been a long summer wait, but we’re just days away from the start of Revolution Season Two! Today NBC unveiled another trailer for the show, which picks up in a ruined former United States after the missile attack unleashed by Randall last spring.

Revolution returns on a new night and time — Wednesdays at 8/7c — starting this next week, September 25.

Beware of some potentially spoilery speculation below.

The trailer hints at a little bit more of where the story is going. Some of our characters have found themselves in the walled town of Willoughby, which looks to be under threat — perhaps from an outside force. Charlie is off on her own with a new romantic interest, Adam (played by Patrick Heusinger, who has had stints on Royal Pains and Gossip Girl), and Miles looks to be going up against a man who thinks the downfall of civilization means he can do whatever the hell he wants.

Meanwhile, Aaron may be developing a very special relationship with the trillions and trillions of nanites in the world — revealed at the end of last season to have caused the worldwide blackout. A recent trailer showed Aaron suffering a mortal injury, so we’re guessing that the nanites are able to save his life (perhaps thanks to Rachel?) … and then stick with him. It could make for some very cool developments for the fish-out-of-water character.

We’re loving what we have seen of Revolution‘s new season so far. It really looks like the writers took the summer to evaluate what worked and what didn’t in the show’s first season, and have come back with an aggressive plan to use the show’s characters and premise to their greatest potential.

Head over to our Revolution series guide for more on the show!