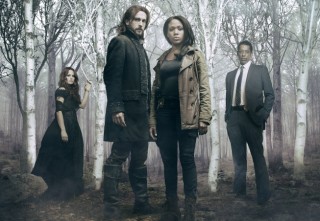 If you like headless villains wielding shotguns and riding on horseback through modern-day towns, this is the show for you.

FOX will be the first network out of the gate with the series premiere of its new fantasy series Sleepy Hollow (9/8c). The balls-to-the-wall show comes from Alex Kurtzman and Roberto Orci, whose long line of recent credits include Star Trek, Fringe, and Hawaii Five-0.

Tom Mison stars as Ichabod Crane, a Brit who fought heroically for the Colonies during the Revolutionary War. The premiere episode kicks off with Crane’s 18th century bout with a masked Redcoat, who proceeds to follow our hero forward in time into the present day … despite the fact that Crane cut off his head. 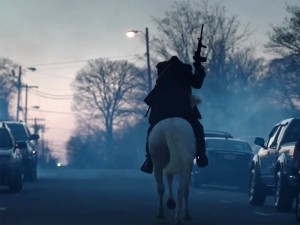 Ichabod then joins forces with Sleepy Hollow’s sheriff, Abbie Mills (Nicole Beharie), and must stop the Headless Horseman … who hasn’t just gone on a killing spree, but is also one of the mythical Four Horsemen of the Apocalypse.

In other words: Get ready for lots of action, lots of man-out-of-time references, and a smorgasbord of mythology ranging from the Bible to witchcraft to the sort of “secret American history” stories you loved in National Treasure.

The show will air on Universal Channel in the U.K., starting October 9.

Keep up with Sleepy Hollow each week right here at SciFi Stream! We’ll be following the series with our new series guide.

Are you watching Sleepy Hollow?