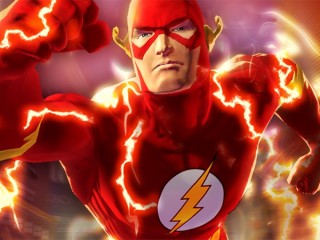 The CW is planning a super-charged spin-off of its new comic book hit Arrow.

Flash will follow the lead of The Originals and a hopeful Supernatural spin-off (story) as a “planted pilot,” airing first as a regular episode in its parent series.  The character of Barry Allen will be introduced in episodes 8 and 9 of Arrow‘s upcoming second season.  The actual pilot will be episode 20, when the character returns.

The news was announced by Arrow co-creators Greg Berlanti and Andrew Kreisberg, who will pen the episodes along with writer and DC Comics legend Geoff Johns.

Barry will start out as an ordinary man, with the episodes telling his origin story.  Allen is a forensic scientist working for the Central City police department.  As is fitting with the current take on the Green Arrow, the character will be as grounded and as realistic as possible.

“It will be fun for the audience to see how we do our take on The Flash’s powers,” Kreisberg said. “Some will feel very familiar to those who know the comics, and other stuff will feel different yet fresh and exciting.”

“That said,” Berlanti added, “he does need powers to become The Flash. And he will be The Flash. He will wear a red costume, and he will go by that name.”

If all goes well and the network is happy with the results, characters would be back with his own show on the small screen in the fall of 2014 — the first time since the CBS series based on the comic book speedster aired in the 1990-1991 season.  (That show starred John Wesley Shipp in the lead role.)

The character also appeared through various episodes of Smallville during its 10-year run, though there the teenaged “Bart Allen” never used the famous moniker.

Casting for the role begins this week.  Arrow returns October 9.