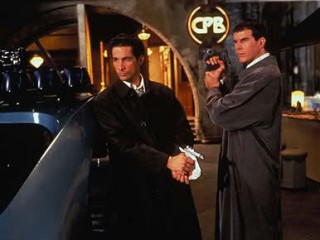 Whether or not NBC’s Revolution is your cup of futuristic dramatic tea, it is having one notable effect on the 2013-2014 season.

The show’s high ratings look to be spawning a sci-fi heavy pilot season, with just about every U.S. broadcast network sending numerous genre concepts to the pilot stage. (CBS remains the exception, as a network that scores big on procedurals and doesn’t have much time for genre fare.)

In fact, this year looks to be a record for the number of science fiction and fantasy-themed shows that have reached the pilot stage.

Here’s the run-down of newly-commissioned pilots:

J.J. Abrams (LOST, Alias) and J.H. Wyman (Fringe) are teaming up again for an as-yet untitled project set in the near future, where human LAPD cops are partnered up with advanced, human-like androids. The FOX series is being described as an action-packed buddy cop series, and will definitely be one to keep your eye on. Offhand it sounds reminiscent of the short-lived Showtime series Total Recall: 2070 (pictured above) — though perhaps with a focus on action rather than dark, moody intrigue.

Over at NBC, Abrams has also sold a pilot titled Believe. The network describes the premise like this: “An unlikely relationship develops between a young girl with a gift and a man sprung from prison who has been tasked with protecting her from the evil elements that hunt her power.” Alfonso Cuaron (Harry Potter and the Prisoner of Azkaban) and Mark Friedman (The Forgotten) are writing and executive producing, with Abrams and long-time production partner Bryan Burke producing.

NBC has also ordered a pilot for The Sixth Gun, based on the comic series and produced by former LOST co-showrunner Carlton Cuse. It’s “the story of six mythical guns in the Old West,” according to The Hollywood Reporter. “When the Sixth Gun, the most powerful and dangerous of the group, resurfaces in the hands of an innocent girl named Becky Montcrief, dark forces reawaken.”

The CW is prepping Oxygen, an “epic romance” between a human girl and an alien boy. According to Deadline, he and eight of his kind “are integrated into a suburban high school 10 years after they landed on Earth and were consigned to an internment camp.” Maybe Twilight meets Distict 9? The pilot is written and produced by Meredith Averill (The Good Wife).

The same network has also green-lit a pilot for The Hundred, a 4400-esque story set 97 years after nuclear war has devastated human civilization. “A spaceship housing the lone human survivors sends 100 juvenile delinquents back to Earth to investigate the possibility of re-colonizing the planet” (Deadline). It’s based on a forthcoming novel series of the same name by writer Kass Morgan.

Also at The CW is The Selection, a second stab at a pilot reminiscent of The Hunger Games. Set 300 years in the future, the show focuses on a reality television program in which a young girl from an impoverished North America competes for the prize of marrying the nation’s wealthy prince. The network passed on the pilot last year but asked for the script to be rewritten, and just gave the green light to a second pilot. (Read more at Entertainment Weekly.)

Series based on Wonder Woman (titled Amazon) and Robin Hood are also still in contention.

All that, and the little network that could is also considering The Originals — a spin-off of The Vampire Diaries, using a fourth season episode of that show as a backdoor pilot. Joseph Morgan (“Klaus”) would star alongside Phoebe Tonkin (“Hayley”) and Daniel Gillies (“Elijah”). The episode airs April 25.

In addition to the much talked-about S.H.I.E.L.D., set in the Avengers universe and executive produced by Joss Whedon, ABC is working on developing a zombie-themed series titled The Returned.

In addition to the untitled Abrams/Wyman series over at FOX, Delirium is based on the bestselling book trilogy by Lauren Oliver. The story is “about a world where love is deemed illegal and is able to be eradicated with a special procedure,” says Deadline. “With 95 days to go until her scheduled treatment, Lena Holoway does the unthinkable: she falls in love.” Karen Usher, Peter Chernin and Katherine Pope will executive produce.

Finally, FOX is tapping Fringe producers Bob Orci and Alex Kurtzman to create a show based on the legend of Sleepy Hollow, titled … Sleepy Hollow. Though the original story certainly isn’t lacking in fantasy elements, it remains to be seen just how “fantasy” this series will be (… and so whether we’ll keep up with it here on the site).

It’s a nice thing to see, considering that the current broadcast season ended up so light in new genre fare. Along with Revolution (which returns from its long hiatus on March 25), the five broadcast networks added Arrow and … and … that’s about it.

Official series pick-ups will be announced in May. While not every pilot will make it to air, of course, things look bright for the fall season.

Stay tuned to SciFi Stream for updates on these and other new shows! On our In Development section we’re also tracking Evolve (ABC), Para Time (FOX), Tomorrow (ABC), and a wealth of new series pilots on the cable networks.

Which new pilot sounds most interesting to you?