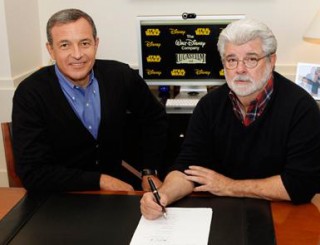 Ready for the biggest science fiction news of the year? George Lucas has sold his company for $4.05 billion.

The new owner of LucasFilm Ltd. — which includes the massive Star Wars franchise, as well as LucasArts, Industrial Light & Magic, and Skywalker Sound — is The Walt Disney Company, which will pay half the price tag in cash and half in stock. Lucas is the studio’s sole shareholder, as well as its Chairman and Chief Executive Officer.

As a show of intent, Disney and LucasFilm are putting Star Wars: Episode VII — a film many of us believed we would never see — straight into production, with a target release in 2015.

Episodes VIII and IX will follow every two to three years, Disney’s Bob Iger said in a conference call following the announcement (Deadline).

Lucas has always prided himself on his autonomy from the Hollywood studios, and thanks to the financial success of Star Wars over the decades he was able to bankroll the prequel trilogy (Episodes I-III) himself. (Twentieth Century Fox distributed.)  Today Lucas spoke of his desire to hand over the franchise to a new generation of filmmakers, and to see through the transition in his lifetime.

“For the past 35 years, one of my greatest pleasures has been to see Star Wars passed from one generation to the next,” Lucas said in a press release. “It’s now time for me to pass Star Wars on to a new generation of filmmakers. I’ve always believed that Star Wars could live beyond me, and I thought it was important to set up the transition during my lifetime. I’m confident that with Lucasfilm under the leadership of Kathleen Kennedy, and having a new home within the Disney organization, Star Wars will certainly live on and flourish for many generations to come. Disney’s reach and experience give Lucasfilm the opportunity to blaze new trails in film, television, interactive media, theme parks, live entertainment, and consumer products.” 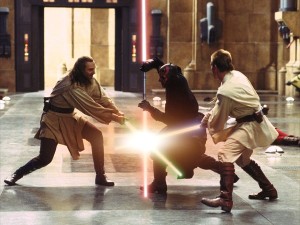 Kennedy has served as Lucas’s right hand for years and in June was appointed Co-Chairman of LucasFilm.  She will become President of LucasFilm (reporting to Walt Disney Studios Chairman Alan Horn) and executive produce Episode VII and any more future Star Wars films.

Lucas himself will be a creative consultant on the future films — no doubt the best possible scenario for fans who would like to see some continued input from the man who created the Star Wars universe, but who also felt that his total control over Episodes I, II, and III caused them to kind of suck.

Following a bad stretch of years Disney is now on the up-swing, previously acquiring Pixar and Marvel Studios and showing that they are able to let filmmakers like The Avengers‘ Joss Whedon have creative control over even their biggest blockbuster projects.

Watch the video below for more on the future of the Star Wars films straight from Lucas and Kennedy.

On television, The Clone Wars continues its fifth season on Cartoon Network. And we’re eager to hear if Disney plans to pull the trigger on that long-rumored Star Wars television series.  LucasFilm reportedly has lots of work done on the series, including as much as a full season of scripts already written.

There are currently no plans for the Indiana Jones franchise, which LucasFilm also owns, due at least in part to the fact that the rights are complicated by Paramount’s interests.

What do you think? Are you excited about Star Wars: Episode VII — and can Disney make it not only a commercial success but a create one, as well?