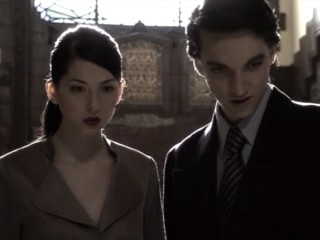 For one reason or another, Caprica is one of those shows I never got around to watching when it was on. I enjoyed the pilot movie when it was released on DVD long ago, and thought it had potential for an interesting character drama set in a futuristic city. But the first couple of episodes past that really didn’t catch my interest, so I set the show aside and figured I’d come back later. After the show was cancelled after just one season, I figured there was no pressure to catch up on the story any time soon.

I don’t currently live in the States but picked up the first half of the season while home for Christmas, and last month I finally decided to give it a go. I’ve seen a little bit into the back half of the season at this point — so please, no spoilers for me in the comments section! (You can track my progress by watching how far the episode guide has been filled out.)  But if you haven’t seen the show yet, do watch out for plenty of spoilers on the first 12 episodes or so.

The series does start out slow. Amanda Graystone is coping not only with the death of her daughter, but with the realization that she was connected with the terrorist bomber who blew up the train where she died — if she wasn’t one of the bombers herself.  Her story arc is wholly emotional, and makes for some interesting beats — mostly from her friendship that develops with Sister Clarice, who as the secret head of the STO on Caprica has ulterior motives. The scene where Clarice lets a little bit of her monotheism show — urging Amanda to “trust God,” to which Amanda replies, “Which one?” — is particularly good.  But, all in all, this storyline has been an emotional drag on the show.

Daniel Graystone, meanwhile, is trying to keep his company going after his scientists fail to reverse-engineer the stolen MCP processor that can make his robots fight right, and thus fulfill his important military contract. All-in-all it makes for a nice ticking clock scenario, but 10 episodes later it’s also dragging on.

Zoe’s avatar is the key to the whole thing, but she refuses to reveal herself to her father — even under threat of fire, shooting her dog dead where it stands, etc. Zoe is by far one of the most interesting and compelling characters on the show, and actress Alessandra Torresani really is a rising star. The character has just the right balance of cute and dangerous. Her relationship with her father’s young assistant (mostly via the V-world) has been fun, though it came to a gruesome (and, for the viewer, emotionally unfair) end.

The V-world is, not surprisingly, one of the most entertaining aspects of the show. Thank goodness we’ve left behind the dark room of Daniel’s laboratory scenario, and the rave club. Instead we get to see the awesome CG vistas of New Cap City, a video game with a mysterious objective (if there even is one). You only get one chance to play — you die in here, and the game locks you out. No multiple avatars, no second chances. And some people spend most of their time in this realistic version of “Second Life,” so losing it is a big deal. Crime is rampant, different players are attempting different ways of “winning” — and, in my favorite episode yet (“There Is Another Sky”), the artificial avatars created by the Greystones can’t die.

And so Tamara Adama, one of the duller non-characters of the pilot, ends up pure awesome. Inside New Cap City she’s Neo, The One, the kid who can’t die and who develops a sort of super-powered control over her environment. I really, really want to see more of her.

In the meantime, Tammy’s father Joseph Adama is spending all his time in V-world searching for her, until his assistant and brother go to extreme measures to pull him out. Tammy kills his NCC avatar — a gut-wrenching moment, though it’s too bad she didn’t take a little time to talk with him first. She was, after all, the one who sent a messenger to tell him that she’s still in there.

Hopefully Adama has some better places to go to. For one of the show’s main characters, he’s had surprisingly little to do so far. God knows he hasn’t spent much time fathering his son, Willie. And his mother (in-law?) needs to be put in her place, Tauron gran or not.

Adama’s decision to send his brother to kill Amanda Greystone (to “balance it out,” since Daniel only lost his daughter in the train bombing), and later inner conflict over the decision, illustrate an important thing about Caprica‘s weak start. Much like the first year or so of Stargate Universe, Caprica doesn’t have many sympathetic characters I care to root for — and certainly no “heroes.” If Adama hadn’t changed his mind, and if his brother Sam hadn’t recognized that Joe didn’t want him to go through with it, I might have signed off the show yet again. Interesting as the scenarios of the virtual world and real-life grieving may be, I need characters who I wouldn’t rather see suffer and die.

So, I’m heading into the second half of the season pretty happy that the plotlines of the first half seem to finally be moving forward. For as few episodes as this crew produced, the stories sure stall out in the early-going — Amanda mourning, Zoe hiding, Lacy trying to help and sucking at it, Joseph being pissed and looking for a ghost of his daughter … Finally, the robot makes its escape attempt, Amanda tries to off herself (I only wish she had succeeded), Daniel sells his team to his mortal enemy, and Joe is forced back into the real world.

Roll on Season One.