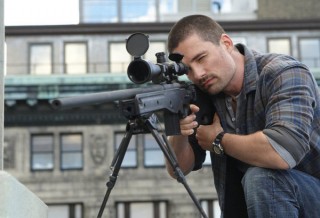 Syfy Channel has just unleashed the first full-length trailer for Alphas, its new show about a team of people with supernatural abilities.  Check it out below!

David Straithairn as Dr. Lee Rosen, a neurologist and psychiatrist who heads up “Section 8” and serves as something of a father figure to the Alphas.

Malik Yoba as Bill Harken, team leader, who can give himself adrenaline-fueled bursts of strength.

Laura Mennell as Nina Theroux, who uses powerful telepathy to control the actions of others.

Warren Christie as Cameron Hicks, a “hyperkinetic” whose mind and body are perfectly in tune, giving him perfect aim, balance, and other enhanced motor skills.

Azita Ghanizada as Rachel Mizrahi, a lab technician who can temporarily heighten one of her senses — while leaving the others useless, often making her vulnerable.

The trailer will roll out in theaters across the U.S. starting this weekend, ahead of films such as The Hangover 2, X-Men: First Class, Green Lantern, and Super 8.